E-scooters: A matter of when, not if

Pure Scooters recently rebranded to encompass all e-mobility solutions, including e-bikes. James Groves sits down with CEO Adam Norris and international managing director Peter Kimberley – now of Pure Electric – to find out more about how this flourishing trend could fuse with the cycle industry

Like it or not, e-scooters are sure to play a significant part in the future of our country’s transport landscape. Irrespective of the vehicles’ current legal status, UK retailer Micro Scooters saw a 50% increase in sales last year, while Halford’s Q4 sales of electric vehicles reportedly rose 96% year-on-year.  Whichever way you look at it, e-mobility is the future, and one company determined to make waves in this burgeoning sector is Pure Electric.

Game-changing technology
The brand – known as Pure Scooters as recently as this year – was launched at the end of 2018 by entrepreneur Adam Norris, father of Formula 1 star Lando. When he was just 26, Norris’ vision of pensions being sold by phone, post or online received the backing of financial services giants Hargreaves Lansdown. The resulting company, Pensions Direct, grew exponentially and was absorbed by the HL group, which is now worth approximately £8 billion. In 2010, Norris founded Horatio Investments, providing around £53 million into over 33 companies and start-ups.

Despite those accomplishments, he says, business is not his true passion. In his youth, he cycled for England B and moved to Belgium in an attempt to turn pro. His passion lies in ‘new, game-changing technology that improves lives’ and he sees e-scooters as the future in reducing car usage, air pollution and congestion in cities across Europe. 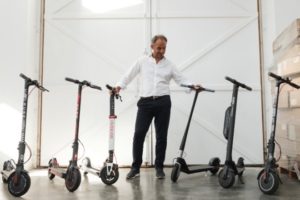 “The whole world is moving toward micromobility,” says Norris. “Cities need it; people need to switch to smaller transport if we are to thrive.” While conducting his initial research into the e-scooter market, Norris decided that, due to its considerable parallels, the cycling industry was best suited to provide market insights.

“I immediately learned that it isn’t something that can exist purely as an online entity,” he says. “We need physical stores.”  Norris eventually settled on the opulent location of Belgravia, London, and opened his first store in May last year. While its initial mandate was to supply the continent with high-quality e-scooters, the company’s transformation into Pure Electric represents a significant widening of the scope.

“The objective, both for Pure Electric and the cycling industry as a whole, is to transport people in a healthy, eco-friendly and efficient manner,” says Norris.  “I have no doubt that the cycling world will embrace e-scooters in the years to come. E-bikes are becoming more and more popular, and introducing e-scooters to complement them brings everything together to build a profitable business.”

Capitalising on a trend
Not content with its considerable expansion into the wider e-mobility market, Pure Electrics hopes to make waves throughout Europe, too. The brand is currently looking at store locations in various capital cities, and has websites ready for launch in France, Italy and Germany. That’s where Peter Kimberley, former managing director of Tredz Bikes and Cycle Republic, comes in. Initially announced in November, Kimberley’s decision to swap bikes for e-scooters perfectly summarised an incessant 2019 trend. It was yet another sign that it’s no longer embryonic; it has arrived.

Kimberley joined Pure Electric as international managing director and will head up European operations while Norris focuses on the UK. “I’ve always been very passionate about e-mobility,” says Kimberley. “I’ve always had e-bikes, and now I ride an e-scooter too! Adam presented me with a really exciting opportunity to do something that’s never been done before.

“Our streets and our cities need better mobility. The more populated the world becomes, the greater the need to transport people in a better, safer way. Public transport is already overcrowded. It’s really important that we do this for the environment, too; it makes for a happier life.” Rather than duplicating its business model across the continent, Pure Electric will assemble a bespoke strategy matching consumers’ predilections.

“It may be that e-scooters or e-bikes are more popular in one store than another,” says Norris. “Our approach will be flexible to meet those demands. Retail trends vary from country to country, so we may also see differing ratios between online and physical stores.”

Uncommon law
When a British-born e-mobility company is hoping to establish itself as a leading e-scooter provider, it’s a fair assumption that the UK’s restrictive laws would provide ample concern for its directors.

“It’s not really an issue for us,” says Norris. “We have a much larger strategy. Not only are we no longer limited to e-scooters, but we’re also venturing into many other countries. Our biggest market next year will be Spain. There are only three countries – Holland, the UK and Ireland – where scooters aren’t currently legal. If you consider our entire consumer reach, including e-bikes, it’s a small percentage.”

Unperturbed as it is, Pure Electric is accelerating its growth by taking over 11 of Halfords’s Cycle Republic stores earmarked for closure, securing a total of 85 jobs. The stores that are transferring include Birmingham, Bristol, Derby, Edinburgh, Gateshead, Glasgow, Liverpool, Manchester, Norwich, Nottingham and Southampton.

Naturally, in the short-term, the company’s UK strategy will focus on e-bikes. “It helps that they’re allowed in public!” smiles Norris. “Interest in e-scooters will ramp up massively when they become legal, and we’ll have everything primed and ready for when that day comes.” The pair are keen to reiterate that while a profitable business model is always essential, providing a beneficial service “for the good of mankind” is paramount.

“We want to make mobility as easy and affordable as possible,” says Norris. “We don’t simply want to flog something; we want to grow the market. To give customers what they want, with e-scooters, e-bikes and P&A. We’ll be working very closely with specialist brands and distributors to produce gear – specific clothing, locks, things like that.”

Kimberley, meanwhile, intends to work closely with TfL and the Government to lobby for the legality of e-scooters. “It’s not just the ‘what’,” he says. “It’s the ‘how’. What should a legal e-scooter look like? We have beautiful cities all across the UK, and look at them today; we’re getting electric buses, electric taxis. The whole world is focused on sustainability and reducing pollution, and e-scooters are a massive, massive part of that.”

An electric future
When I was first introduced to the industry a couple of years ago, e-bikes were still being met with considerable scepticism. Cheating. Lazy. Not real exercise. These were words I heard time and time again from all four corners of the industry. Ask the industry about e-bikes now. Inclusive. Healthy. Convenient. E-scooters, as a true departure from the bicycle, may take considerably more persuasion, but there’s certainly enough potential overlap that IBDs should not rule it out.

“When e-scooters are legal to ride in the UK, I expect them to complement the bicycle, not rival it,” says Kimberley. “You can’t scoot for miles and miles, but they fold down much more quickly and easily, to the point where you don’t even need to lock them outside; you can just put it under your desk. But any further than that and e-bikes are the best way to go. You get to work having exercised, but you don’t feel exhausted.

“I’m a huge supporter of bike shops and it would be fantastic if I could work with them on this. It’s all about coming together, and if you do that and focus on the customer, that’s where everybody wins.”

Is it something, then, that we could see in IBDs in the near future?  “Certainly,” says Kimberley. “As Pure Electric progresses, I expect we’ll begin to supply them with our own builds. The great bike shops of today like e-bikes, and you have to evolve with your customers’ demands and expectations. Pedal bikes will be around for a long time, but one day we’ll look back on them like Penny Farthings. Electric just gets you that little bit further, while still providing plenty of exercise. I expect to see IBDs continue to evolve to reflect that.

Norris admits there is inevitable cannibalisation for those on the fringes. “There will always be those who buy one instead of the other, but it doesn’t make scooters the enemy,” he says. “Some people want to cycle because they’re a purist, and they love it. Equally, there are many people in highly-populated cities who live in small flats and want something extremely convenient. Even a folding bike is still sizeable when packed away, and if that’s a problem for someone, an e-scooter is the perfect answer.

“If you don’t embrace an evolution in a market, someone else will pop up and take advantage. It’s better to be a part of it. 60-70% of bikes sold today are for leisure and commuting, so while some shops might prefer to cater to the true purists, their customer base is mostly made up of casual riders.”

Kimberley believes, quite simply, that electric is common sense. He concludes: “It’s not the e-bike smile. It’s the electric smile.”

E-scooter trials will be brought forward from next year to next month to help encourage more people off public transport and onto greener alternatives.

Originally set to take place in four Future Transport Zones, the trials of rental e-scooters – which will now be offered to all local areas across the country – will allow Government to assess the benefits of e-scooters as well as their impact on public space, with the potential to see rental vehicles on UK roads as early as June.