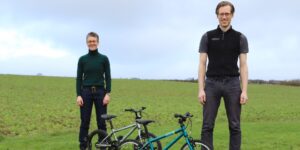 The importance of getting children cycling young is clear – but so is ensuring they have the right model that suits their needs. This is something that Islabikes founder Isla Rowntree was keen to provide when she started the business back in 2006.

But now Rowntree has stepped back from her role as head of the Ludlow-based company, with her first employee Tim Goodall taking over as managing director. So what was behind this decision? “The whole definition of a good time is such a hard thing to pin down,” she says. “You only ever know when it was the right time in hindsight.

“Islabikes has been going for 15 years, and I’ve known that I’ll need to exit at some point. I’m not somebody that sees myself working forever.” But Rowntree says that if we’d asked her a year ago, she probably wouldn’t have thought about it for another four or five years at least – but the last 12 months have brought the preciousness of life into a sharper focus.

“My parents, who are in their late 70s, live next door to me,” she continues. “They moved here about nine years ago with the view that if such a time would come, I would be able to help with their care needs. They’re both fit and healthy, riding their bikes pretty much every day still, but I’m acutely aware that that situation could change quite suddenly. I dread being torn between them needing me and work needing me, not feeling that I’m doing either properly, and feeling guilty about both.

“Running a business like Islabikes means there’s a time and headspace commitment that’s quite substantial. I’m sure anyone that’s in a position of responsibility will understand that. That’s the main reason – and that’s been brought into sharper focus. That and Tim – my successor – his availability, readiness and willingness when we first had that conversation a few months ago. It made me think: ‘Well, why not now?’ We made the decision together to make that happen.”

“I’m very comfortable with the decision at the moment but we’re still in the transition period. I’m outside the business. I’m doing handover work, working from home behind the scenes with Tim. He’s very much front and centre now. I’m not visible at all. I’m contemplating a different feel to my life going forward. It’s quite adrenaline-fuelled being in a busy organisation.” Rowntree says she doesn’t have any plans for what to do next at the moment: “I don’t want to leap into doing something else, I don’t want to carry that rush forward into another project. I’m deliberately not deciding what I’m going to do next, I just want to ride my bike.”

Market changes
Islabikes was founded 15 years ago specifically to make high-quality children’s bikes, something Rowntree says was prompted by her friends and family who had reached an age where they’d got young children and needed advice on what bike to buy for them. “That drew my focus into children’s bikes and particularly small children’s bikes, and what was available then. I can’t dress it up – it just wasn’t very good. They were so heavy, typically heavier than my own bikes. It felt like the industry had lost sight of the users with its children’s bikes. Even good, well-respected brands, I considered at that time to be pretty poor. And I felt that this may actually put some children off cycling.

“I’m an evangelist for cycling. Most of us are in this industry because we love cycling as well. It’s one of those industries where you’ve got people that are passionate about the product. You want people to like what you like. “I felt that the children of my friends and family might not want to cycle because the bikes were not going to give them a good experience and that’s really what prompted me to start the business.

“As a small adult, I had already, over the years, modified my own bikes to make them easier to use. I knew that it makes quite a significant difference to your confidence and competence on a bike to get these details right and I felt that I could bring that empathy and extrapolate it down to really small cyclists, to four-year-olds, and bring those benefits to them as well.

“I had confidence about knowing where I’d find the solutions. That’s why I started the business. It was quite a leap of faith in some ways and with hindsight and middle age, I look back and I think: ‘Where did that confidence come from?’ But I was confident, I felt very sure about it.”

The company’s first bike for a four-year-old was launched at £100, Rowntree continues, and at that time it was about double the price of the next most expensive bike on the market, with many other bikes available for even cheaper than that.  “We’ve changed the perception of what is acceptable to pay for a child’s bike. That is a big change – not just from an industry point of view but from the general public. There are as many processes for making a child’s bike as there are for an adult’s bike. It’s only the tubes that are shorter and the wheels are a bit smaller, so why would you spend so little?

“Lots of other brands are now making much better bikes for children. It’s brilliant because that ambition of giving children a better cycling experience is never going to be achieved through Islabikes alone. It’s achieved through all children’s bikes being improved, and I think that’s happened. I take some satisfaction from catalysing that change.” 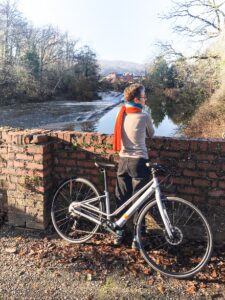 Women in the industry
There’s no doubt that cycling is a very male-dominated industry, although Rowntree says that is beginning to change. “Design is very male-dominated, and quite a narrow section – so straight, white males aged between 30 and 45. I think we are all formed by our subconscious bias, that applies to men but also to women. It’s only relatively recently that I’ve been reflective and thought about my time in the cycling industry.

“I started at 16 when I worked in a bike shop; I’ve been in the industry almost all of my working life in one way or another. I just got on and did what I wanted to do – but I’m quite an unusual personality in that way. When I was much younger, I was so used to people treating me in a certain way, because I was a woman, that I didn’t question it or even necessarily see anything wrong with it.

“But with the benefit of hindsight, I can see that I’ve had to battle every step of the way to make everything happen and I wonder whether if I had been male, if that would have been the case.”

Rowntree tells the story of choosing her O levels when she was 13 – of wanting to do design but being told that only boys had done it in school up to that point. “I had an ongoing negotiation with the school that went into the first term of our O levels,” she explains. “I was put in the art class initially and eventually persuaded them halfway through that first term to let me change to design.

“I still managed to get an A and design became a major part of my career. Thereafter, I think I just expected things to be a bit difficult, it was my normal and I didn’t let it stop me. In hindsight, I was probably quite bolshie, and I now wonder how many people had the potential but didn’t get the opportunity because they weren’t bolshie like me? There must be thousands.”

In terms of her experience within the cycling industry, Rowntree says she’s generally been treated well, receiving lots of help along the way from different quarters. “It hasn’t been a negative experience, but I can see that it could be quite daunting for somebody who perhaps is not as pushy as I’ve been.”

Rowntree says that now is a massively exciting time for cycling, with COVID accelerating behaviour changes that many have been campaigning for for years. “But we need to seize the day now and make that stick,” she says. “By that, we need to think beyond us as individual companies – we need to think and act as a coherent group.

“We must add our voice to and support the excellent work the organisations that represent cyclists’ interests are doing – Cycling UK, Sustrans, British Cycling. As an industry, the more people that cycle, the more we benefit. Cycling can deliver positive change in so many different ways. It sounds like a cliche when we say it but it really can. I’d love to see that happen in the UK – that would be fantastic.”