The future for urban mobility is now

Most modern cities are designed for cars. But cycling is changing the way people move around cities. Across the country, there are different policies to make cities bike-friendly. Liverpool plans to become the fastest growing cycling city by 2026. Cardiff is building its first segregated cycleway in the city centre. It’s clear urban cycling mobility is on the rise. It may not be at the same level as countries such as Denmark, but it is clear there are many policies in place to increase cycling in urban areas.

Urban cycling health benefits
As an example, 21% of all trips in the Netherlands are made by bike. The percentage is impressive. But apart from the mobility aspect, there are many health aspects to consider as well. Of course, cycling in busy traffic is not the healthiest, but it sure beats sedentary methods of transportation such as driving.

One of the areas where cyclists are actually healthier than other commuters is with fitness levels. Cyclists have lower weight and reduced obesity risks. Losing weight and having a healthier body mass index are strongly impacted by regular cycling. There is also supporting evidence to show cycling makes ageing easier on cyclists. With a stronger immune system, cyclists are known to be healthier and less prone to various common illnesses such as colds.

Cycling health benefits also go beyond the physical. There is supporting research data to show how cycling positively impacts brain health, mood, and energy levels. It has been shown that even cycling for 20 minutes per day can combat depression, one of the most common problems of modern societies. Studies also show cycling is one of the top activities for general mental health, as long as it is performed on a regular basis.

With lower body weight, cyclists have the ability to reduce heart problems. With better mood, cyclists are able to live happier. The combination of these benefits alone should be enough to prompt more people into living the future in the present by cycling more.

The economic benefits of urban cycling
On an individual level, cycling health benefits are unmatched. But there are other types of benefits cities can count on as well. Economic benefits are hard to overlook as cities need money to run properly. One of the distinct advantages of high cycling percentages in city centres comes with higher retail footfall. Practically, people may still be able to walk to their favourite shops in city centres instead of driving to a shopping mall in the detriment of small businesses located in the heart of cities across the country.

In Europe, cycling now creates over 650,000 jobs. From making bikes to running service shops, these jobs can scale even further if more people are would embrace two-wheel urban mobility. In 2015, the European Cycling Forum also published an interesting study on cycling economic benefits. It looks like cycling paths and roads which don’t have busy traffic also lead to higher home prices. This is why cycling can also influence property prices. In a way, this has two explanations. First of all, if an area has lower car traffic, it also has less pollution. Secondly, these areas also tend to be calmer and generally friendlier to families.

Bicycle infrastructure as a method of boosting income
The development of new bicycle infrastructure can lead to a series of benefits which mainly start with economic gains. In terms of economic growth, each city has a personal approach as each municipality has a different budget. For example, it has been calculated that if 20% of Liverpool’s population would cycle, the city would gain £31 million per year. The same municipality has calculated that if 10% of the population would actually cycle, the NHS would save £250 million per year. At the moment, it is estimated that only 2% of the country is actually cycling.

Creating more bike lanes is crucial for basic cycling infrastructure. But closing off entire city areas can also come with its own benefits, such as reducing accident rates or eliminating congestion problems. One of the areas where cycling infrastructure can come with serious health benefits, however, is actually with carbon emissions. Not all municipalities worry about the ecological footprint at the moment. But going back to the example of Liverpool, which is a city with a lower car ownership rate than the rest of the country, reducing carbon footprint is still a top priority. The city plans to reduce emissions by more than 30% by 2024.

In turn, this will also reduce the pressure on the NHS as people will become healthier. It will also reduce commuting time, especially at peak hours. Most importantly, such measures can also provide free access for all people in the city centre.

Bicycle tourism opportunities
Bike tourism is an emerging field of possible economic growth. There are public and private organisations which now leverage the opportunity biking has with tourism. From taking cyclists on green hills to taking them around city landmarks, bike tourism has large potential. Those who want to try bike tourism both inside and outside the country at events such as Tour de France can have a look at various cycling breaks discounts for the latest events and dates. 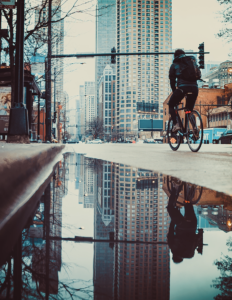 But bike tourism is closely related to bike sales and rentals. This is why cities have now accepted many people don’t even need to own a bike. Large metropolitan areas are now offering various programmes with docking stations across the city to allow both residents and tourists to explore the city and move freely at their own pace.

A few limitations of urban cycling across the country
When it comes to embracing urban mobility on two wheels, it’s also important to assess current risks. The cycling infrastructure in most cities may still be developing. It is also why more needs to be done in order to reduce the number of accidents and other risks associated with cycling in urban areas.

The good news is that municipalities understand the importance of road safety and infrastructure. They go hand in hand. In fact, it has been shown that most accidents happen in intersections, where cyclists meat drivers. A positive example comes from London’s Blackfriars Road where the traffic lights were synchronised to increase road safety. The city decided to programme the lights in a way in which cyclists and cars would never pass a major intersection at the same time.

Pollution is another major concern. Simply cycling in the area with high traffic can lead to various respiratory issues. Inhaling petrol fumes is very dangerous and as a result, more cyclists are now wearing respiratory masks to protect their own health.

Examples of what is currently being done to increase two wheels urban mobility
Apart from public policies implying investment in infrastructures such as creating dedicated bike lanes and green walls between traffic and cycling lanes, there are other interesting options which are or which can be applied right now to make cycling the future.

One of these strategies comes from Norway and it is based on the principle that cycling should also be done in areas with hills, where it would be naturally harder to do so just with based on individual strength. The Trampe bicycle lift is one of the ideas specifically tailored to give cyclists a helping hand when going uphill. At the start of the bike lift, cyclists push a button to emerge a footplate from the ground. This small metal plate pushes cyclists uphill. Such investments in infrastructure could bring cycling in the areas where it would not be otherwise possible.

A new cycling concept is also applied in London. Since building bike docks can be expensive, the city is working with a small number of licensed operators to lend bikes across the city. Practically, bike docks are not needed in this case. This would lower cycling costs for cities even further. In some municipalities, it would even eliminate the need for bike docks completely.

But the biggest problem urban cycling has at the moment is simply covering large areas with bike-friendly routes. Simply creating a few bike lanes in the city centre is not enough, at least from the perspective of safety. Linking cycling to other transport infrastructure is crucial. For example, cyclists should have the possibility of commuting safely from the train station to any part of the city. In the Netherlands, this is already a reality. Cities are now planned so that cyclists can easily connect to other transportation methods.

Final considerations
Embracing cycling is now a reality and the future of cycling might already be a reality in many countries. In the UK, there is clear evidence to show that larger cities are taking steps in ensuring cyclists have the infrastructure they need to stay safe and well-connected on public roads.

Most importantly, cycling remains a fun way of commuting which also allows people to live healthier lives. Cyclists can burn a few hundred calories in a half hour bike ride. With lower BMI, they can achieve lower body weight and have a healthier body. At the same time, cycling can also create a feeling of community, a feeling which is starting to become rarer in larger cities.